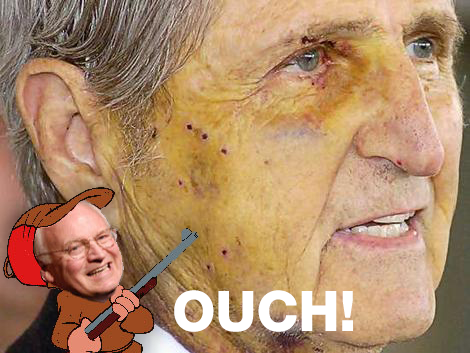 On February 11, 2006, then U.S. Vice President Dick Cheney shot Harry Whittington, a 78-year-old Texas attorney, while participating in a quail hunt on a ranch in Riviera, Texas. Both Cheney and Whittington called the incident an accident.

The incident was reported to the Corpus Christi Caller-Times on February 12, 2006, by ranch owner Katherine Armstrong. The Bush administration disclosed the shooting incident to the public the afternoon of February 12. Local authorities released a report on the shooting on February 16, 2006, and witness statements on February 22.

On February 14, 2006, Whittington suffered a non-fatal heart attack and atrial fibrillation due to at least one lead-shot pellet lodged in or near his heart. Cheney did not speak publicly about the incident until February 15 in an interview with Fox News. Early reports indicated that Cheney and Whittington were friends and that the injuries were minor. Whittington later clarified that he and Cheney were not close friends but acquaintances.

So who else might have been on the receiving end of Cheney’s shotgun?

Find out in Dick Cheney Shot Me in the Face – And Other Tales of Men in Pain now available at Amazon, B&N, and Unsolicited Press.